Astrolapp Live Planets and Sky Map v5.0.0.6-installed [Patched]
Minimum Requirements: 4.2+
APK Description: Astrolapp shows the paths of our Solar System’s objects in the sky, including the orbits of the Sun, the Moon and the planets, in the style of a medieval astrolabe. 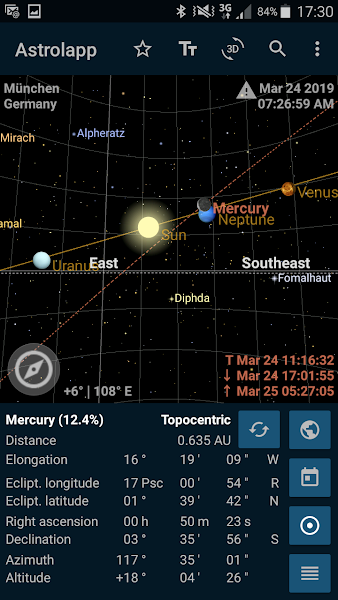 In addition to the Solar System, Astrolapp’s sky map shows 9096 of the brightest stars and the 48 Ptolemaic constellations. Use Astrolapp as a planning tool for your next astronomical observation trip or as a companion for evening star-gazing: It offers a colorful daytime mode as well as a darker red-light mode for comfortable use with the night sky!

What makes Astrolapp’s representation of the night sky different from other star-gazing apps? Astrolapp not only helps to locate stars and planets as they can be seen from Earth at any date and location, but visualizes the motions and the mechanics of the sky through a planispheric representation of the celestial sphere:

From the surface of the Earth we perceive the sky as a sphere (the celestial sphere) around us. The upper halfsphere is the visible part of the sky above our horizon, while the lower one is ‘covered’ by the earth. The stars and the bodies within the Solar System appear to move on that sphere.

Astrolapp displays the celestial sphere in the exact same way as someone sitting on the north (resp. south) pole of this sphere could view it. From this point of view the Sun appears to move along a circle parallel to the celestial equator in the course of a day like on a 24-hours-clock. The other stars and planets appear to move somewhat more or less than 360 degrees per day, depending on proper motions of the objects within the Solar System.

Features:
* Planisphere showing the positions and motions of the Sun, the Moon and the planets
* Display of the 9096 brightest stars and the 48 Ptolemaic constellations
* Moon phase and phases of the planets; Retrogradicity of planets
* Precise numerical position data for stars and the Solar System’s objects in an ecliptical, equatorial or horizontal coordinate system; either heliocentric, geocentric or topocentric
* Real time mode or manual mode, the latter allowing to “scroll the sky” into arbitrary centuries
* Automatic detection or manual selection (optionally via a map) of the observer’s geographic location. Save locations to permanent memory.
* Graphical display of the ecliptic and the positions of the zodiac signs
* Optional height and azimut lines
* Calculation of local solar time and local and Greenwich sidereal time
* Zoom into the graphical display, i.e. to observe transit events in real time, or in history or future
* Night mode (monochrome black/red)
* Projection with center in the north or south pole of the celestial sphere, depending on the position of the observer