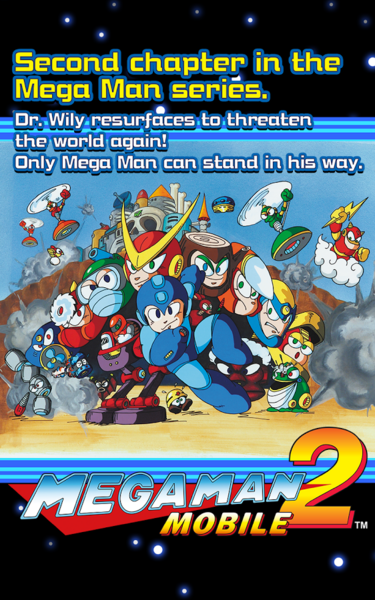 With Dr. Wily’s mad scheme for world domination brought to a halt, peace reigns once more. But Dr. Wily has secretly created another eight stupendously powerful robot masters. With these villainous bots unleashed upon the world, can Mega Man stand up to the challenge and stop Dr. Wily again!?

Mega Man 2 was the game that introduced the “E Tank”! E Tanks are single-use items that can be used at any time to refill Mega Man’s life gauge.Keep your eyes peeled for E Tanks placed around the stages!

Mega Man 2 is a larger-scale game than its predecessor, with eight enemy robot masters instead of six,
and a total of fourteen challenging stages to traverse; the eight robot masters’ bases, and six deadly Wily stage

MODES
This version features a choice of two difficulty modes.

・Normal Mode – (Unlimited continues) The continue screen is displayed whenever Mega Man dies. Selecting Continue allows you to restart from the last checkpoint you passed in the current stage.

・Hard Mode – This challenging mode limits your number of continues, and enemy attacks deal more damage. There are also fewer checkpoints within stages.

OPTIONS (The following settings can be adjusted in-game.)
・Sound – Increase the number to raise the volume.
・Vibration – Set to “On” to have your device vibrate when Mega Man takes damage. (Default setting: On) Note: This option will not be displayed on devices with no vibration function.
・Attack – Auto: Hold the attack button for rapid-fire Mega Buster shots. Manual: Each press of the attack button fires one Mega Buster shot. Tap repeatedly for rapid-fire shots.(Default setting: Auto)
・Speed – Choose between Normal and High to adjust gameplay speed.
・Key Config – Change position of the in-game attack button and jump button.

The games now feature a newly-added Turbo Mode, offering a step up in game speed.
You can now select game speed when starting a game.